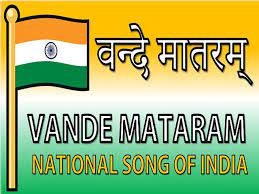 The tune Vande Mataram, made up in Sanskrit by Bankimchandra Chatterji, provided inspiration to the individuals in their struggle for flexibility. It has an equal condition with Jana-gana-mana. On January 24, 1950, the President, Dr. Rajendra Prasad generated a statement in the Constituent Assembly, "the tune Vande Mataram, which has played a historical component in the battle for Indian freedom, shall be honoured equally with Jana Gana Mana as well as shall have equal condition with it."

The initial political occasion when it was sung was the 1896 session of the Indian National Congress. The song belonged of Bankimchandra's most well-known unique Anand Math (1882 ).